An Philadelphia Police Officer inadvertently punched a female public defender.  According to witness reports, a defendant was acting unruly in the hallway.  The PD was attempting to calm her client down.  Police intervened and a physical altercation ensued.  During the altercation, the female PD was accidentally struck in the head by police.

Members of the public are calling the incident another example of police power being abused.  On the other hand, some have cited the officer’s actions as an appropriate response to a boisterous and out of control defendant. According to one eyewitness, “there was something mentally wrong with the defendant.”

There are also reports that Sen stood in front of her client to shield him from the looming altercation. According to Sen, “He (the defendant) was bleeding fairly profusely and the cops continued taunting him.”  The officer who punched Sen was accused of brutality in a 2006 federal civil-rights lawsuit.

Philly.com’s reporting of the coverage can be viewed here. 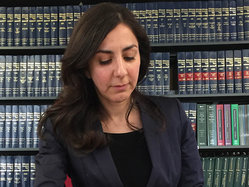 If you have been falsely charged, speak with a Philadelphia Criminal Defense Attorney.  We provide aggressive and experienced reputation to citizens of Philadelphia facing legal problems.  Call for a free consultation.